(Greek: uncleanness of body or mind; filth; defilement; anything disgusting)

automysophobia (s) (noun) (no plural)
An excessive fear of being dirty and stinking, or of personal filth which may result in abnormally frequent bathing, as shown in the illustration below: Ted thought that he needed to take a long bath or shower each morning, every time he came home from school, and in the evening, thinking that he smelled quite offensive to himself and to others, and developed automysophobia. 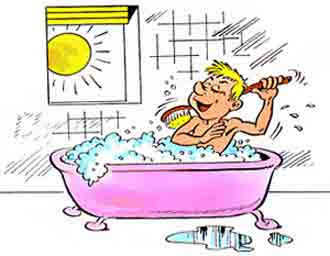 —Word Info image © ALL rights reserved.
mysophilia
1. A pathological attraction to dirt or filth; sometimes with sexual manifestations.
2. A paraphilia relating to soiled or dirty material or people.
mysophilic
A reference to a condition involving a pathological attraction to soiled or filthy material or people.
mysophobia (s) (noun) (no plural)
A pathologic fear of dirt, uncleanliness, or contamination: Mrs. Clean was so occupied with her home being totally taintless that she washed her curtains almost every week, changed her bedding every day, and washed her hands compulsively, and she was known by her friends to have mysophobia.
mysophobiac (s) (noun), mysophobiacs (pl)
Someone who has an abnormal hatred of filth or contamination: Mr. Clean was different from his wife, who was a mysophobiac, and didn't mind having dust on the furniture or having dirty dishes in the kitchen waiting to be washed.
mysophobic (adjective), more mysophobic, most mysophobic
Relating to a person who is afraid of dirt or contamination: Shirley was certainly a mysophobic individual who avoided being in a bus with other people, or in a taxi where others have traveled because of the filth, stains, and grime that could even be seen!